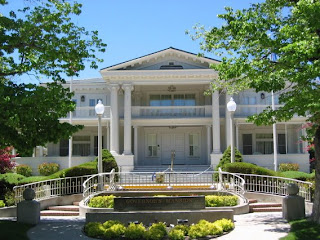 Nevadans have long disdained pomp and circumstance. This trait was particularly evident during the state’s first four decades, when lawmakers refused to provide funding to erect a home for the elected governors.

As a result, from 1864 to 1909, each of the state’s governors either built his own dwelling in Carson City or rented quarters.

While many of these “unofficial” governor’s mansions were quite nice—such as the one built on Mountain Street by Governor Reinhold Sadler, a wealthy businessman and rancher, who served from 1896-1903—the state did not have a formal “people’s house” for governors to live and entertain guests.

Finally, in 1907 State Assembly Bill 10, known as the “Mansion Bill” was passed by the Legislature. It directed the state to secure a site and build a permanent residence for Nevada’s governors and their families. The lawmakers appropriated $40,000 for building and furnishing the home.

Mrs. T.B. Rickey, who lived nearby, sold a site at 600 N. Mountain Street to the state for a token amount of $10 and Reno architect George A. Ferris (not related to G.W.G. Ferris, the man who invented the Ferris Wheel, who grew up on Carson City) was hired to design the house.

Ferris also designed the McKinley Park School in Reno and the former Civic Auditorium in Carson City (now home of the Children’s Museum of Northern Nevada).

The architect developed plans for a two-story, 23-room home with a large grand entry area, a formal dining room, a pair of salons, a private den, upstairs bedrooms and a large kitchen area. A porch supported by fluted Ionic columns wraps around the second story.

The home’s exterior incorporated what historians describe as a Classical Revival style with Georgian and Jeffersonian motifs.

After soliciting bids, the state awarded a $22,700 contract to build the mansion. Construction began in 1908 and continued until early 1909.

The first chief executive to occupy the house was Acting Governor Denver S. Dickerson and his family. His wife, Una, gave birth to a daughter, June, in the mansion on September 2, 1909; she is the only child ever born in the mansion.

The mansion has hosted 17 governors and their families since it opened. During the past century, the mansion has been renovated several times including a partial refurbishing in 1959, a more substantial remodeling in 1967 and a $5 million reconstruction in 1999-2000, which was funded by private donations.

During that $5 million remodeling, which was privately funded, a 6,608-square-foot addition was built north of the mansion, called the Nevada Room, with a commercial kitchen and meeting space for up to 300 people.

For more information about the mansion, pick up a copy of “State of Nevada: The Historical Governor's Mansion," produced in 2003 by former First Lady Dema Guinn.

Beautiful photos of the mansion’s interior and exterior, by Minden photographer Jay Aldrich, enhance text written by Robert Nylen, curator of history at the Nevada State Museum, and Guy Louis Rocha, the former Nevada State Archivist, who, respectively, describe the history of the mansion and the story behind the Nevada Day celebration.

Additionally, the book contains brief histories and portraits of every Nevada Governor and First Lady (up until former Governor Kenny Guinn).

Copies of the booklet can be purchased at the Nevada Legislative gift shop (http://www.leg.state.nv.us/giftshop/).
at March 22, 2009
Email ThisBlogThis!Share to TwitterShare to FacebookShare to Pinterest