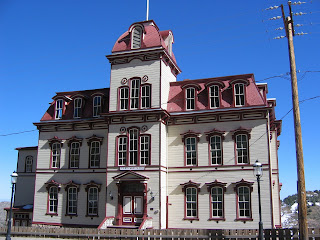 For years, Virginia City billed itself as “the West’s Liveliest Ghost Town.” So, it’s not surprising that the former mining town would be the focus of a great many ghost stories. In fact, there are at least two books on the subject, including “Haunted Nevada” by Janice Oberding and “Comstock Phantoms” by Brian David Bruns.

Reportedly, specters have been seen in about a dozen Virginia City places including the St. Mary’s Art Center, which is housed in the former St. Mary-Louise Hospital, built in 1876 and operated for several decades by the Sisters of Charity religious order.

Witnesses have reported seeing a woman in long, white robes or a nun dressed in white robes roaming the hallways and looking out the windows of the four-story brick structure.

One version of her story is that in 1878, a patient in the psychiatric ward started a fire that killed him and a nun on duty. It is said that she continues to wander the building looking for patients to help and frequently musses the sheets and blankets on the bed in her former room.

There have also been reports of the ghost of a blonde-haired woman in the spiral staircase near the back of the Old Washoe Club bar. Opened in the 1870s, the Old Washoe Club was originally known as the Millionaires Club and was a men’s drinking establishment for the Comstock’s most successful business owners.

The winding staircase served as the original entrance to the Millionaires Club, which was upstairs. The club offered gambling, prostitutes and liquor to its members.

In addition to the female ghost, affectionately called “Lena” by regular bar patrons, there have been sightings of an ethereal old prospector sitting at one of the barstools as well as the ghost of a 13-year-old girl, who some believe was murdered in an upstairs bedroom.

People have also reported bar glasses falling from shelves for no reason, doors that lock and unlock and a chandelier that moves by itself.

Other ghost sightings have occurred in Virginia City’s Silver Terrace Cemetery, where people claim to have witnessed a strange glowing tombstone at night at the cemetery, and the Fourth Ward School in South Virginia City, allegedly home of "Miss Suzette," a ghost who walks across the schoolyard to the front steps, then disappears. She is believed to be the ghost of a teacher who worked at the school in 1908.

There are also accounts of people seeing the ghost of Henry Comstock, one of the founders of Virginia City and namesake for the Comstock Lode. Comstock is said to haunt the old Ophir Mine, located south of the Virginia City cemeteries (near the intersection of Carson Street and Cemetery Road).

According to one web site (Haunted Hotspots), in the winter of 1874, an odd and mysterious light suddenly emanated from the mouth of the mine and rose 60-feet in the air.

Thinking it was an underground fire, several townspeople investigated but found no flames or smoke. Afterwards, there were unusual occurrences at the mine—elevator cages summoned when no one was there—as well as strange noises.

Eventually, the decayed ghost of Comstock appeared, identified himself and said he was reclaiming his mine. Allegedly, he tormented miners by blowing out their candles and howling loudly.

The reason for Comstock’s restlessness is that he was an early mine owner of a portion of the fabulous silver vein that bear his name but he sold his holdings for far less than they were worth (supposedly about $11,000).

Later, he tried operating several dry goods stores but wasn’t much of a businessman and went broke. In September 1870, while prospecting in Montana, he allegedly committed suicide. Now he is said to haunt his former digs.

Both “Haunted Nevada” by Janice Oberding and “Comstock Phantoms” by Brian David Bruns are available from local bookstores or online at www.amazon.com.
at June 10, 2007
Email ThisBlogThis!Share to TwitterShare to FacebookShare to Pinterest