Site of the 'Fight of the Century' 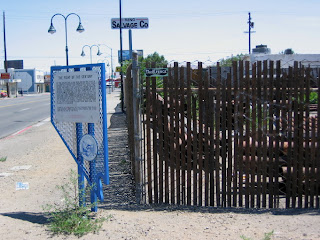 The spot where the “Fight of the Century” took place doesn’t look like much today.

On the southeast corner of Fourth and Toana streets in an industrial section of Reno is a battered metal sign in the shape of Nevada. The sign marks the spot where heavyweight champion John Arthur “Jack” Johnson, a black man, and former champ James J. “Jim” Jeffries, who was white, battled for 15 rounds on a hot July day in 1910.

The sign stands in front of a shabby, wire metal fence with thin wooden slats, which surrounds a storage yard filled with RVs and other vehicles. Printed on the marker are the words: “On this site on July 4, 1910, Reno hosted ‘The Fight of the Century,’ a heavyweight championship boxing match between John Arthur “Jack” Johnson, the black title holder, and James J. “Jim” Jeffries, a former champion seeking to regain the title he had vacated in 1904.”

The site is largely forgotten—overlooked by most of the drivers racing by on Fourth Street—although there were a few ceremonies commemorating it a few years ago on the 100th anniversary of the fight.

But the locale continues to resonate in historical terms. The fight itself was controversial—it was billed as a battle between the races—and in its time was seen as a metaphor for the state of early 20th century race relations.

In fact, in 2004 famed filmmaker Ken Burns produced a four-hour documentary for public television, “Unforgivable Blackness: The Rise and Fall of Jack Johnson,” which included photos and commentary about the bout.

Johnson had become the first-ever black world heavyweight-boxing champion when he vanquished Canadian Tommy Burns in 1908. Not surprisingly, almost immediately after his victory there were calls by a number of prominent white religious and political figures for a “Great White Hope” to come forward and reclaim the title for the white race.

For the next two years, the outspoken Johnson battered a succession of so-called “Great White Hopes” who sought to defeat him.

In 1910, boxing promoters managed to persuade Jim Jeffries, a former heavyweight champion who had retired undefeated six years earlier, to step forward and fight Johnson. In accepting the bout, Jeffries noted, “I am going into this fight for the sole purpose of proving that a white man is better than a Negro.”

Jeffries, however, was in no shape to fight the better-conditioned Johnson. The former champ, who had hung his gloves to farm alfalfa in Burbank, California, was about 100 pounds overweight and 35 years old.

On the day of the fight, in a makeshift wooden arena in Reno, Johnson was in his prime—32 years old and a trim 206 pounds—while Jeffries weighed-in at 227 pounds; he’d had to drop 70 pounds.

The fight itself was heavily promoted as a battle between the races. For weeks prior to the event, newspapers throughout the world published stories focusing on nearly every nuance of the bout, which was the first to ever be hailed as “The Fight of the Century” (a claim now used for nearly every championship fight).

Boxing entrepreneur George Lewis “Tex” Rickard, a former Goldfield saloon owner, had set up the match by offering $50,000 to each fighter for the film rights, a signing bonus of $10,000 and a $101,000 purse (winner would get two-thirds). In 1897, Nevada legalized prize fighting, which was considered violent and uncivilized in most states.

Rickard had entered the fight business in 1906, when he promoted a world lightweight boxing championship bout in Goldfield between Oscar “Battling” Nelson, a white boxer, and Joe Gans, a black fighter. Gans had won that contest in the 42nd round after Nelson was disqualified for landing a low blow.

Once the fight began, the two men pounded on each other for 15 rounds (the fight was scheduled to go 45 rounds) before Johnson, who was so much faster and stronger than Jeffries that he appeared to be playing with his opponent, twice knocked down the former champ.

At the second knock-down, Jeffries’ second jumped into the ring, ending the fight before the fading former title-holder could be knocked out.

Later, Jeffries acknowledged, “I could never have whipped Johnson at my best. I couldn’t hit him. No, I couldn’t have reached him in 1,000 years.” Johnson’s win ignited celebrations among his jubilant black fans around the country. However, in some cities, the merriment evolved into rioting between blacks and whites.

The bout, which drew about 20,000 fans, was a boost to Reno’s image and economy. Rickard would go on to promote many other fights, including many with heavyweight champion Jack Dempsey.

As for Jeffries, he retired again for good while the flamboyant and controversial Johnson continued boxing. In 1915, another “Great White Hope,” Jess Willard, defeated Johnson in Havana, Cuba. He died in a car accident in 1946.
Posted by The Backyard Traveler at 3:01 PM