Caliente Hangs on to its Railroad Roots 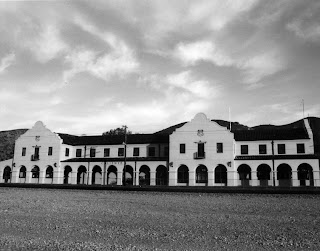 Modern Caliente probably wouldn’t exist without the railroad. Its biggest building is an old railroad depot, its business district parallels railroad tracks, not the highway, and then there’s the town’s iconic, “Company Row,” more than a dozen nearly identical wooden houses built by the railroad for its workers.

Despite the overwhelming influence of its railroad, Caliente actually started out as a ranching area. In the early 1860s, two escaped slaves, Ike and Dow Barton, began ranching in the Meadow Valley Wash and Clover Wash region of Eastern Nevada.

A few years later, the brothers sold their holdings to Charles and William Culverwell, who owned a cattle and hay operation that primarily served the nearby mining camps of Pioche and Delamar.

The area’s character changed in 1901 with the construction of the Salt Lake rail route, which served the San Pedro, Los Angeles and Salt Lake Railroad and the Union Pacific Railroad.

Regular service didn’t begin until 1905, but prior to that Caliente served as a division point and supply hub for workers building the route south through the Meadow Valley Wash. An engine terminal and sidetracks were constructed at Caliente, which provided long-term employment opportunities and boosted the town's economy.

In 1901, a post office was established in the area and a town was surveyed, which was named Caliente (the Spanish word for hot) because of the area’s natural hot springs.

Driving through Caliente, it is still possible to find places that reflect the town’s rail roots. Foremost is the large Union Pacific Railroad Depot in the center of town. This classic, two-story Mission-style building was constructed in 1923 by the railroad and originally housed a hotel, restaurant, telegraph office, and train station.

Over the years, the depot has been used as city hall, office space, an art gallery, library, community center, and school.

East on Clover Street (the main street) from the depot is Caliente’s business district, which contains many buildings dating to the late 1920s.

Gottfredson’s store, in the middle of the district, is one of the town’s oldest commercial structures, having been built in 1907 as a bank and hotel by Charles Culverwell.

At the eastern edge of the downtown (on Clover near Denton streets), visitors will find the Richards Railroad Hotel, a two story building constructed in about 1910 to house railroad workers. Adjacent are the Underhill home, a two-story stone house that was once a saloon, and the Underhill General Merchandise Store, a classic false front building. Both were built in 1905.

On the other side of the tracks (north) is the Cornelius/Scott Hotel, a three-story stucco structure built in 1928. In its heyday, the hotel hosted many dignitaries, including President Herbert Hoover.

Across U.S. 93 from the Cornelius/Scott Hotel is Caliente’s classic row of railroad homes. Here you can find some of the best-preserved examples of the cookie-cutter company housing built by the railroad in 1905.

If you wander a bit through the blocks north of the hotel, you can find the Caliente Stone School (corner of Culverwell and Market streets), which is considered an excellent example of the “Classic Box” style of architecture from the early 1900s. The school, now a church, was built in 1905.

The Caliente Elementary School, across Market Street from the Stone School, is a streamlined stucco structure with Art Deco overtones, which was built in 1922, after the earlier school became too small.

Caliente is located about three-and-a-half-hours north of Las Vegas via U.S. Highway 93. For more information, go to http://www.lincolncountynevada.com/Lincoln-County-Nevada-Caliente.html.
Posted by The Backyard Traveler at 7:49 AM