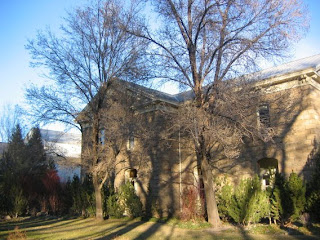 Historic State Printing Office, constructed in 1885-86, is on Carson City's East Side.

When the historic Kit Carson Trail on Carson City’s west side was created a few decades ago, it gave the mistaken impression that there wasn’t much history east of Carson Street.

The book describes more than two dozen government buildings, commercial structures, houses, and sites that are as historic as any found on the other side of the Capital City.

In 1875-76, Friend built the state’s first weather observatory, which included a six-inch refracting telescope, on what is now the eastern corner of Stewart and E. King streets.

Friend also built a house adjacent to the domed observatory (today, the site of both buildings is known as the Charles W. Friend Park). After 1887, Friend served as Nevada’s first state weather service director and worked with the Army Signal Corps to set up weather stations throughout the state.

The tour begins at the Nevada State Capitol, which is located on the eastern side of Carson Street. Built in 1870 of native sandstone, the capitol houses a number of exhibits including portraits of all of the state’s governors and a display describing the early history of the state.

Other significant east side sites noted in the book include:

• The Old Armory Building at 406 East Second Street was built in 1882. Originally owned by the Dangberg Land and Livestock Company, it served as the Nevada State National Guard Armory (hence the name) from 1905 to 1978.

• Fred Snyder House at 214 South Pratt Street, built in the 1920s, is one of Carson City’s most interesting homes. Constructed of multi-colored stones, it incorporates the style and architecture of the buildings constructed at the Stewart Indian School. Of course, that’s not surprising since its original owner was Fred Snyder, superintendent of the school from 1919 to 1934. Stone used in the house came from quarries throughout the state.

• Vansickle-Lynch House at 311 Pratt Street is a lovely country Victorian that was constructed in 1906 on the site of a horse race track. Over the years, it has had only two owners, both of which took great pride in the home’s upkeep.

• Leport-Toupin House at 503 East Telegraph is one of only three Second Empire-style homes built in Carson City. Constructed in 1879, it boasts a distinctive mansard roof and projecting dormer windows. Original owner, Alexander Leport, was a prominent early Carson City merchant.

• The Railroad Car House at 708 North Walsh Street is just what the name says. Underneath a number of additions and remodels is an 1872 Virginia & Truckee Railroad baggage and mail car. The car was moved to this site in 1938 and converted into a home for the railroad’s railmaster. It continues to serve as a family home.

• The Paul Laxalt State Building at 401 North Carson Street was erected in 1891. The four-story red-brick Victorian was Nevada’s first federal building, originally housing a post office, federal court offices, U.S. Land office and the U.S. Weather Bureau. Among it’s most prominent features is a three-faced clock in a 106-foot tower. Today, the building houses the Nevada Commission on Tourism and Nevada Magazine.

• The Goni House at 108 E. John Street was built in 1883 and originally located on Minnesota Street. In 1896, it was moved to this location by Emanuel Goni, a prominent Spanish Basque sheep rancher. Still owned by the Goni family, it has been used by commercial businesses in recent years.

Copies of “The Charles W. Friend Trail, An East Side Historical Driving Tour of Carson City, Nevada,” can be purchased for $2.95 from the Nevada State Legislature gift shop.
at October 26, 2009
Email ThisBlogThis!Share to TwitterShare to FacebookShare to Pinterest