The Final Resting Place of the Enigmatic "Old Virginny" 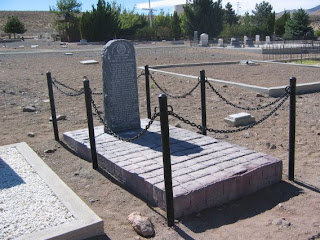 Few figures in Nevada history have been the subject of as many conflicting legends and stories as James Finney, better known as “Old Virginny.”

Part of the reason for different takes on the man often called the father of Virginia City is that actual details about his life are sketchy at best.

For example, even his real name is in dispute. In some accounts he is James Fennimore (or even, Fenimore) while in others he is named James Finney. Ronald M. James, author of “The Roar and the Silence,” perhaps the most definitive history of Virginia City, however, refers to him as James Finney.

What is known is that Finney was born in about 1817 in the state of Virginia—hence his nickname, “Old Virginny.” Little is known about his early years but apparently he headed to California during that state’s gold rush of 1849 and ended up in the Kern River area.

Comstock writer Dan DeQuille, who generally comingled facts with fanciful tales, later claimed that his name was originally Fennimore but he changed it to Finney after allegedly killing a man in California.

Wright also said that sometime in 1851, Finney crossed the Sierra Nevada to the Gold Canyon area near present-day Virginia City, where he began prospecting for gold.

However, another source, Mormon Station (modern day Genoa) founder John Reese, reported in his 1884 memoir that Finney was living in Gold Canyon when Reese passed through in 1850.

And Myron Angel’s 1881 “History of Nevada” said that Finney actually traveled to Nevada while working as a teamster for John Reese.

There appears to be a consensus that Finney resided in Gold Canyon during the decade between 1851 and 1861. It was during this time that he worked as a placer miner and encountered many of the other colorful figures in Virginia City’s past such as Henry Comstock, after whom the Comstock Lode is named.

In 1859, Finney moved up the canyon, which had become depleted of mineral wealth, along with a handful of other miners and began working a promising outcropping that was named “Gold Hill.” It’s thought have been the southern end of a rich silver vein that eventually would be known as the Comstock Lode.

A handful of accounts, mostly written years later, generally describe Finney as a well-liked and hardworking miner who was mostly likely illiterate and had a weakness for alcohol.

Ronald James noted that Finney “earned a reputation for having good nose for prospecting. All sources consistently support the idea that he was one of the first to recognized the mineral-bearing potential of the future Comstock Lode.”

But Finney is also often portrayed as a drunkard who didn’t appear to appreciate the magnitude of his discovery. In 1862, Henry DeGroot, a cartographer and writer, said Finney was “honest” but also “ignorant.”

DeGroot also reported that Finney sold his mining claim for an old horse, some blankets and a bottle of whiskey. This tale, which is probably not true, would go on to become accepted dogma with a number of other writers repeating variations of the same story.

An equally apocryphal story is the one about Finney’s naming of Virginia City. The popular Virginia City legend is that an inebriated Finney was stumbling down the town’s main street when he stumbled and broke a bottle of whiskey. According to the myth, he decided to use the occasion to “christen” the community “Virginia City” after his state of birth.

James, however, noted that the earliest source for that story was Dan DeQuille, who presented it in his 1876 book, “The Big Bonanza,” in which, he pointed out, “the author was equally capable of passing off legend as fact.”

James concluded, “Whether this happened or not, evidence clearly indicates that local miners decided in a meeting to name the community Virginia City.”

There are even differing accounts about his death in Dayton on June 20, 1861. In his “Myth of the Month” column, former Nevada State Archivist Guy Rocha recounted several versions including one that pegged Finney’s death as happening on April 26, 1861, another that said he died in July 1861 and yet another placed the event in 1865.

The cause of his demise is generally said to have been from a fall from a horse, although the details vary. In one version, he was “thrown from a bucking mustang” while drunk, while another simply stated that he fell from a horse and fractured his skull.

Today, visitors can ponder all the stories about Finney while standing at his grave site, which is located in the historic Dayton cemetery. The spot is marked with an impressive stone marker describing his life that was erected by the Dayton Historic Society.
at August 21, 2009
Email ThisBlogThis!Share to TwitterShare to FacebookShare to Pinterest