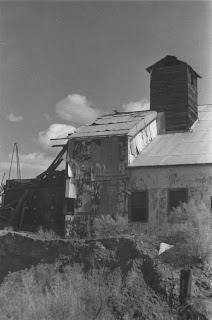 You’re driving on Interstate 80 and spot an exit sign for a place called Mote.

You wonder—what the heck is Mote? Or Toulon (pictured above)? Or Valmy? In fact, as you drive you notice that there are a bunch of names on exit signs along the interstate that identify places that don’t seem to amount to much.

Not surprisingly, there is a story behind nearly every one of those names (except, it seems, for Mote, which apparently is little more than one).

For instance, head east of Fernley and you can encounter one of the first of these phantom sidings, at the intersection marked Nightingale (about 17 miles from Fernley).

At first glance, it appears to consist of a small geothermal plant. But closer study indicates that in addition to being the location of a geothermal food processing facility, Nightingale was once a stop on the Emigrant Trail.

In the 1840s, emigrants discovered the hot springs located in this valley. Originally called “Boiling Springs,” the spot offered the only water within 20 miles (it was cooled and, despite being salty and brackish, used by early pioneers).

Later, the place was called Brady’s Hot Springs and became the location of a popular resort that featured a warm water swimming pool.

The name “Nightingale,” which is associated with the spot today, can be traced to a former mining town once located about 21 miles north. In 1917, tungsten deposits were discovered in the Nightingale Range to the north of I-80. A small camp named after the mountains cropped up at the site. but, after about a decade, faded away.

The Nightingale Range was named in honor of Captain Alanson W. Nightengill (the name was corrupted on state maps), the first State Controller and a survivor of the 1860 Pyramid Lake Indian War.

Twelve miles east is the exit sign for Jessup. While little is located there today, Jessup was another short-lived mining town, located 4 miles north of the present intersection with I-80.

Gold was discovered in Jessup in 1908, and within a few months nearly 300 people had settled in this remote camp. The boom was over by the end of 1909 and the town melted back into the desert.

Another 12 miles farther is the turn-off for Toulon. Unlike most other mining sites, the original mill is still standing here—it’s the large, two-story metal building adjacent to the railroad tracks.

Toulon, which appears to have been named for a French seaport (although why a spot in the desert is named after a seaport remains a mystery), was founded in 1917 following construction of a large mill to treat tungsten, gold and silver ore mined at Nightingale.

The mill was used sporadically over the years. The impressive ruins are located on private property and the owners are extremely protective of the site. Ask before stepping onto the property or take photos from the road.

The next orphan exit is located 14 miles east of Lovelock at Oreana. In the 1880s, the Southern Pacific Railroad developed a sidetrack and small station at this site.

In 1912, with the discovery of rich gold and silver deposits in nearby Rochester, Oreana boomed and soon had several stores, saloons, a large hotel and a depot. A year later, the Nevada Short Line Railway was built to connect Rochester with Oreana.

Rochester’s mines began to decline after 1917 and Oreana quietly slipped into obscurity. By the mid-1920s, its last businesses closed.

Today, foundations and a few wooden houses are the only survivors. Rochester, located 10 miles southeast, is a ghost town with several headframes, a decaying mill and a handful of other buildings.

Another 16 miles down the interstate brings you to the Humboldt exit. While today Humboldt seems to consist of a roadside rest stop, a few small ranches and a grove of huge poplars and cottonwoods, the site originally was a stagecoach stop.

In 1868, the Central Pacific Railroad built the Humboldt House there, which served as an inn and meal stop for train passengers traveling across Nevada.

The presence of good water allowed the railroad to develop a kind of oasis in the desert with shade trees, flower and vegetable gardens, and fruit orchards. The need for Humboldt House disappeared after the 1890s when the railroad introduced dining cars. The inn operated as a roadside stop for several more decades before closing in the 1940s.

More about other I-80 place names next time.
at June 19, 2009
Email ThisBlogThis!Share to TwitterShare to FacebookShare to Pinterest