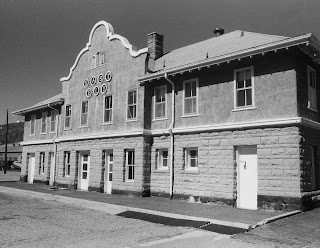 Some of the most historic buildings still standing in the eastern Nevada town of Ely are found in a district known as East Ely.

Located directly east of the main part of Ely, East Ely largely owes its development to the Northern Nevada Railway, which had its maintenance yards and depot in that part of town.

The East Ely area includes all of the buildings along East 11th Street, which for many years as a kind of second commercial district for the community. During the railroad’s heyday, the several blocks on 11th Street, between the depot and Aultman Street, housed everything from banks to grocery stores to hotels.

The most prominent East Ely structure is the historic two-story sandstone Nevada Northern Railway depot, which was built in 1907. The handsome structure, on the north end of E. 11th Street, served as the main station and home office of the railroad, which operated between 1907 and 1981.

These days, the depot is the centerpiece of the Nevada Northern Railway Museum and Historic Railroad complex, which includes the maintenance buildings, rolling train equipment and tracks. Train rides are offered on selected weekends during the summer months.

Adjacent to the depot is the Nevada Northern’s former communications building, now used as museum and railroad offices, which was built in 1915. The two-story, brick, utilitarian structure once served the offices of the railroad’s superintendent, trainmaster, chief clerk and roadmaster.

On the opposite side of the depot is the wooden railroad freight and express building, which is believed to be the oldest structure in the complex (erected in about 1906).

Wandering up East 11th Street, you can still find other reminders of the area’s railroading past. For example, the elegant, shaded red brick home on the corner of 11th and A streets was built in 1937 for a former railroad official.

The former Nunnelly’s Ely City Grocery building at 2200 East 11th has, in recent years, been restored into a bed and breakfast called the Steptoe Valley Inn. The wooden structure was built in 1907 and originally served as a grocery store and saloon (a wall separated the two businesses). In later years, it was an apartment house and a single-family home.

The Bank of Ely building at 298 East 11th, built in 1907, is one of the most impressive survivors of East Ely’s glory days. The brick structure served as the Copper National Bank from 1910-1925 and was later home of the Ely Power and Light Company. More recently, it has been used as offices.

Other noteworthy East Ely buildings include:

• Former East Ely Post Office and White Pine News Office at the corner of D and East 11th. Built in 1907, the single-story brick structure was originally a saloon, then became the print shop for the White Pine News. From about 1912 to the 1950s, half the building was used as a post office.

• Gunn-Thompson Building at 1095 Avenue D. This large, two-story brick building was constructed in 1907 by George E. Gunn and William B. Thompson, who were prominent in the development of Ely’s copper industry. For many years, it served as mining company offices with apartments on the second floor.

• Miller’s Lincoln Highway Garage at 1120 Avenue C. This single-story rectangular structure, which has been remodeled many times over the years, can trace its roots to a small wooden building (since incorporated into the rest of the structure), which was erected in 1906. In 1925, E.R. Miller built a larger structure around the original building, which was used as a garage. In the 1940s, it was sold to the White Pine County School District.

The community of Ely was founded in the late 1800s, following the discovery of rich mineral deposits in the area. The first mining involved gold and silver but later, it was found that the region was flush with copper—which eventually became the most moneymaking mineral in the state.

For more information about Ely contact the White Pine Chamber of Commerce, 636 Aultman, Ely, NV 89301, 775-289-8877 or http://www.whitepinechamber.com/.
at May 24, 2009
Email ThisBlogThis!Share to TwitterShare to FacebookShare to Pinterest