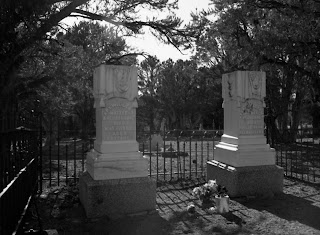 “Aurora's gone now, torn down for the bricks not long after the old man and I made our pilgrimage. The buildings are now a row of factory chimneys in California” — David Toll, “The Compleat Nevada Traveler”

No place deserves the sad fate of Aurora. A thriving mining camp with more than 10,000 people in the 1860s, Aurora is one of Nevada’s lost historic sites.

The remnants of Aurora can be found about 30 miles southwest of Hawthorne via State Route 359, Lucky Boy Pass Road and a dirt road marked for Aurora. The road is rocky, so a high clearance, four-wheel drive vehicle is needed.

Gold and silver were first found in the Aurora area in August of 1860. Within a short time, hundreds of miners were streaming into the region to make their fortunes.

According to early records, the discovery site was named Aurora, meaning “Goddess of the Dawn,” while the mining district was named “Esmeralda,” in honor of the groves of piñon trees that covered the surrounding hills.

By 1861, the new town had grown to about 2,000 residents. It had tent saloons and restaurants, shops, more than a half dozen stamp mills to process ore and regular stagecoach service from Carson City.

All that development soon attracted the attention of both California and Nevada. In the spring of 1861, California created Mono County and named Aurora as the seat. A few months later, Nevada responded by naming it the seat of Esmeralda County.

The battle over Aurora’s status continued for nearly two years, during which time there were dual county courts and officials. The matter was finally resolved in October 1863, when both states agreed to an impartial state boundary survey. When it was completed, Aurora was found to be four miles inside of Nevada.

Aurora’s fame spread and in April 1862, a young Samuel Clemens arrived in the camp to mine for gold. Clemens stayed in Aurora for several months and during that time did a little prospecting, speculated on mining stock and began sending humorous mining camp letters to Virginia City’s Territorial Enterprise newspaper, under the pen name, “Josh.”

Impressed by his writing, the Enterprise offered Clemens a job, which he accepted. Once at the Enterprise, he began writing under his more famous pen name, Mark Twain.

Aurora prospered during the next few years. By the middle of 1863, it had grown to a veritable city, with nearly two dozen saloons and stores, two newspapers, a dozen hotels, 16 mills and nearly 10,000 people.

Like many mining towns, however, much of the wealth was temporary. Rampant mining stock speculation, overbuilding and overly optimistic projections of the area’s mineral reserves had created an artificial boom. By early 1865, the town had started to decline, losing half its population and businesses.

Aurora experienced a second, smaller boom in the late 1870s, but by 1883 had dwindled so much that nearby Hawthorne was able to take away the county seat. The post office closed in 1897.

But Aurora wasn't finished. Just after the turn of the century, the mines were reopened and the town once again came alive. By 1906, several hundred people had moved back into Aurora, which again had a post office, newspaper and other businesses.

This later boom lasted until about 1919, after which Aurora slipped away for good. In the late 1940s, scavengers leveled the town’s remaining buildings to reuse the bricks in California.

Today, there isn’t much remaining of Aurora. Even the quiet ambiance of the area has been permanently shattered by the presence of large modern mining operations, which have gouged holes in the surrounding hills.

Wandering the townsite, you can still find a few wooden shacks, cement walls, the remains of an 1897 stamp, foundations, cellars and a couple of stone walls.

The best testimonial to the town’s prominence is found in the large cemetery grounds, located on the hills to the north. There, you can find the impressive final resting place of a Nevada State Senator and a handful of other obviously noteworthy folks.

There are extensive mill foundations adjacent to the town site, overlooking one of the many huge open pits.

Additionally, you can find the picturesque stone and rusted metal remains of an old smelter or kiln in the canyon, alongside the road leading into Aurora. Wooden troughs show where a small creek was diverted to provide water.

Across the road from the smelter ruins, half hidden in the trees, you can also find some beautiful clay cliffs that resemble those found at Cathedral Gorge State Park in Eastern Nevada.

Aurora is only 13 miles from the ghost town of Bodie, now a California State Park. You can drive between the two, along the Bodie Creek, but the seasonal road, which parallels a creek, is extremely primitive and requires a four-wheel drive vehicle.
at November 05, 2008
Email ThisBlogThis!Share to TwitterShare to FacebookShare to Pinterest 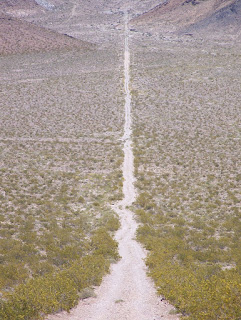