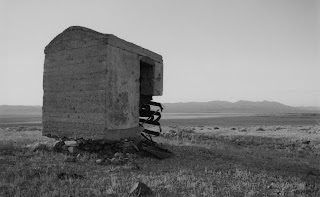 A rectangular, concrete vault perched precariously on a crumbling rock foundation is just about all that remains of the old mining town of Fairview, located 40 miles east of Fallon on U.S. 50.

Rich silver deposits were discovered in Fairview in 1905. A major mining boom kicked off a year later when Nevada mining investors George Wingfield and George Nixon (both involved in developing Goldfield and several other Nevada mining camps) purchased several claims in the district.

By June 1906, a town was laid out and lots were sold. During the next year, thousands of people drifted into and out of the camp, which was soon had several hotels and banks, two dozen saloons, and two newspapers (the Fairview News and the Fairview Miner).

Because of its remoteness, basic commodities were expensive in Fairview. Nevada historian Stanley Paher notes in his “Ghost Towns and Mining Camps of Nevada” that a plot of sagebrush and sand sold for $100 a front foot, while ice was $4 per 100 pounds, water was $2.50 a barrel, and wood was $20 per cord.

In 1907, enthusiasm about Fairview was so great that there was widespread discussion about a railroad connection. According to rail historian David Myrick, the most common rumor was that the Nevada Central Railroad, which ran from Battle Mountain to Austin, would go westward to Rawhide, with a spur to Fairview.

But, unfortunately for the town, no railroad was ever built.

Photos from the time show a fairly substantial community laid out in the desert flat below Fairview Peak, overlooking the Fairview and Dixie valleys. The town was several blocks long and wide, with a wide main street lined by about a dozen stores and businesses, including a two-story hotel.

Since there wasn’t rail service, freight, including supplies needed by the town and ore that was sent out of the area for processing, was handled by several auto stages that linked the community to Hazen and Fallon.

Despite the early optimism and the development of a fairly large community, the Fairview area mines began to decline in 1908. The newspapers folded and most of the miners moved to more lucrative districts.

Modest discoveries in 1911—the district produced a total of about $3.8 million in its short existence—spurred another small boom. Much of this new development clustered around the large Nevada Hills Mill built on the mountain behind the original town site.

Mining continued until about 1917. However, by the 1920s only a handful of hardy optimists remained in Fairview.

The original town site, which was in the flat below the mines, began to disappear. Wood from many of the buildings was used in the upper town site or taken for use in other towns. The mill building was dismantled after it was closed, leaving only foundations.

Photos from the 1950s show about a dozen, dilapidated buildings still standing in the upper canyon. But even these didn't have much of a chance of surviving. In the early 1980s, pilots from the nearby Fallon Naval Air Station bombed the wooden structures, apparently believing they were practice targets.

Today, the only noteworthy survivor is the decaying concrete bank vault standing alone on the flat site of the original town. The solid block, open at one end (and definitely not safe to enter), rests on a deteriorating base of natural rock.

Ironically, as you stand on the site of the town, you realize that Fairview also describes the community’s most lasting legacy—the spectacular view of the surrounding valley.
at September 14, 2007
Email ThisBlogThis!Share to TwitterShare to FacebookShare to Pinterest