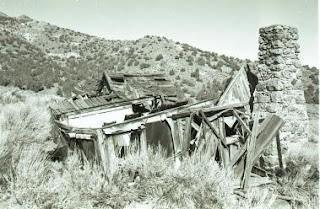 While most Nevada mining towns seem to be located in the more remote parts of the state, there is one, Olinghouse, that developed just east of the Truckee Meadows.

Historic records indicate that this little known mining camp, located in Pah Rah Range, between Reno and Pyramid Lake, even advertised itself as “The Biggest Little Gold Camp in Nevada”—an obvious play on Reno’s famous slogan.

The remains of Olinghouse are located 9 miles northwest of the community of Wadsworth, which is located about 20 miles east of Reno. To reach it, head north on Nevada State Route 447 for 2 miles, then turn west on an unmarked but maintained dirt road. The site of Olinghouse is located about 7 miles from the turnoff.

While Olinghouse never grew very large, it produced sufficient ore to support nearly continuous mining from the mid-19th century to the present.

The area’s earliest mining visitors were itinerant prospectors who had spread out from Virginia City in the hope of discovering the next Comstock Lode. A few of the miners headed north toward the Black Rock Desert, uncovering occasional small veins and other traces of minerals throughout the Pah Rah range.

Prospecting continued sporadically for the next four decades, with the first significant activity beginning in about 1897, following the discovery of gold in White Horse Canyon, three miles north of Olinghouse.

Despite the gold strike, the larger mining companies remained skeptical about the district’s potential, leaving it to a hundred or so independent miners, who were able to recover a few dollars a day working the veins.

A post office was opened in 1898 and a small business district developed over the next decade, which included saloons, restaurants and lodging houses.

The town also acquired its name during this time. Elias Olinghouse was a Wadsworth cattle rancher, who had a large summer ranch operation in the eastern Pah Rah range.

While the town was first named, "Ora," it later took Olinghouse’s name, since he had claim on most of the land in the area.

In 1907, the town of Olinghouse’s fortunes began to look up, as investors seeking to repeat the mining successes at Tonopah and Goldfield, began pouring money into almost any Nevada mining camp that showed promise. Several mills were built, including one just north of Wadsworth, and a rail line was constructed to connect the mines to the mill.

Within the year, however, the boom was over (with the investors making very little money) and the mining activity at Olinghouse diminished. The mill and railroad were dismantled and, once again, only a few dozen miners worked the area, making just enough money to survive but never enough to get rich.

Today, visitors will find a string of modest wooden cabins and homes, most still inhabited, some interesting mill ruins, a few old mine shafts, an abandoned ranch house and, to the north, a modern open pit gold mining operation, which opened in the mid-1980s.

As you first reach the site, you will find the collapsed wooden walls of an old miner's shack, on your left. After passing a few of the inhabited homes, you reach the dilapidated remains of what appears to have been a small milling operation.

Climbing up the hill behind the crumbled wooden mill site, you can find an intriguing mine shaft, which has several skeletal wooden walls surrounding the entrance and a fallout shelter sign.

A little farther west from the center of the community, you can find the stone remains of a larger mill site, including some wooden supports and other ruins. Another half mile or so, you find an interesting abandoned brick and wood farmhouse, standing alone in a field of sagebrush and weeds.

In the end, Olinghouse is just another of the hundreds of mining camps that took seed, blossomed for a time, and were slowly reclaimed by the uncaring Nevada desert.

An informative guide booklet about Olinghouse is John Townley’s “Olinghouse Mining District,” which was published in 1985 and can still be found in some local libraries.
at August 25, 2007
Email ThisBlogThis!Share to TwitterShare to FacebookShare to Pinterest