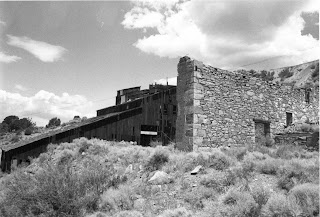 There’s not much remaining in the old mining town of Clifton, located near the Central Nevada mining town of Austin. But, for a time, Clifton was a genuine rival to its better known sister city.

Rich reserves of silver ore were found in the Pony Canyon area of Central Nevada in May 1862. By mid-1863, a tent city of about 500 miners, which was named Clifton, had cropped up near the mouth of the canyon.

Within a year, Clifton had its own post office, hotels, restaurants, an assay office, saloons, shops, a Wells Fargo office and other businesses. Clifton’s property owners were so certain of their town’s future that the price of lots soon skyrocketed.

Not surprisingly, another town soon appeared farther up the canyon, which was named Austin. To entice people to locate in the newer community, Austin lots were offered free to businesses in exchange for help in developing a graded road from the Reese River Valley to Austin.

So, despite the fact that Clifton had the advantage of being situated in a flat area while Austin was in a steep canyon where it was more difficult to build, the latter soon eclipsed Clifton.

Completion of the road—which bypassed Clifton—marked the end of the town. While Clifton still had more people than Austin in May 1863, by the fall, Austin had enough political power and population to claim the Lander county seat.

Within months, most of Clifton's residents had moved to Austin or other mining camps. Reports describe an empty main street lined with abandoned wooden shacks and stores. The post office closed in February 1864 (although it reopened briefly in 1867-68).

The former site of Clifton experienced a brief revival in 1880 when it became the location of a terminus for the Nevada Central Railway and the Austin City Railway (which carried the quaint name "Mules Relief").

A large 30-car train siding was constructed and the former town site, now called Austin Junction, housed a small engine house, turntable and depot. Despite the railroad activity, no houses or businesses were built in the area.

In 1894, the Austin Mining Company, owned by J. Phelps Stokes, constructed a 40-stamp mill at the mouth of 6,000-foot Austin-Manhattan Tunnel, just above the former site of Clifton. The Clifton Mill operated for about ten years.

Today, Clifton offers a handful of ruins and plenty of memories. The large worn, wooden shell of the 100-year-old Clifton Mill remains standing (but remember, it is on private property and is extremely unsafe—so don't enter the building or touch anything).

Adjacent to the wooden structure are the massive stone walls and foundations of other buildings once part of the mill. Wandering the grounds, you can also find rusted metal scraps, machine parts and other mining garbage. A huge tailing pile spreads out in front of the mill building.

The flat area below the mill—part of the former Clifton town site—was later used as a baseball diamond and for other sports. More recently, a rodeo arena was erected on the site.

On the hillside near Clifton, you can see Austin’s historic cemetery, which contains gravesites that date to the 1860s.

Overlooking Clifton is Stokes Castle, a three-story stone tower built in 1896-97 by the Stokes family. The building, designed to resemble a roman villa, was only used briefly as a residence.

According to local legend, the owners, who controlled nearly all of Austin’s mines, could also stand on the tower balconies and spy on workers, who they thought might be stealing ore from the mines that surrounded the building.

The tower was abandoned in late 1897 and has deteriorated considerably over the years. The outside balconies as well as the interior stairs and floors collapsed many years ago. Today, the tower’s stone shell remains an interesting local architectural historical landmark.

The site of Clifton is located three-quarters of a mile west of Austin via a dirt road. To reach it, turn south of U.S. 50, just past the Austin cemetery.

You can find more information on this one time rival to Austin in Paher’s “Nevada Ghost Towns and Mining Camps” and in “Romancing Nevada’s Past, Ghost Towns and Historic Sites of Eureka, Lander and White Pine Counties,” by Shawn Hall.
at July 16, 2007
Email ThisBlogThis!Share to TwitterShare to FacebookShare to Pinterest