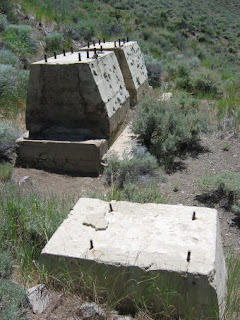 The mining camp of Jumbo never quite lived up to its name. Optimistic prospectors hoped it would produce enormous wealth but it proved to be a pretty small producer of gold and silver ore.

In fact, these days, the real riches found on the road to the former camp are in the marvelous views of the surrounding region. The site of Jumbo is located two miles east of East Lake Blvd., above New Washoe City, via a rugged dirt road marked Jumbo Grade.

Jumbo was founded on the Ophir Grade between Washoe Valley and Virginia City in about 1907. For a few years, a small community of miners managed to eke out a living working the area's mines.

By 1908, the camp boasted a mill, saloons, hotels, shops and a post office, although the latter was closed in November 1910, indicating the transient nature of the community.

In 1915, miners continued to work the area and a ten-stamp mill was built near the settlement. By 1921, however, any valuable ore had run out and Jumbo disappeared like so many other Nevada mining camps.

While Jumbo has an admittedly brief life, the drive or hike to the former mining community is worthwhile because of the views. Jumbo Grade Road, also known as Ophir Grade, rises above Washoe Valley and climbs deep into the Virginia Range before dropping into Virginia City.

During our recent hike along the grade, we found that the first half-mile is paved, as the road passes several newer houses. We came upon a dirt parking area that serves as the trailhead for hikers, bikers, ATVers and others heading up the grade.

After ditching our car, we began the trek uphill on a dirt road that parallels Jumbo Creek. About a mile and a half from the start of the road, the dirt track crisscrosses the creek, which is lined with thick vegetation.

At about the two-mile point, the road becomes rockier and, at one spot, we were forced to cross the creek, which has carved a fairly deep channel.

We continued on the trail, stopping to pick up interesting rocks and to admire the creek, which has a fair amount of water this year. About another half-mile or so we spotted mining tailing piles on the surrounding hillsides.

A bit farther, you can spot the large foundations of a mill site. Two large chalky-gray hunks of concrete and scattered pieces of metal and wood are just about all that remain of the Jumbo mines.

From here, the views, looking west to Washoe Valley, are spectacular. Slide Mountain stands high, directly across the valley, and you can catch glimpses of the sun dancing on the surface of Washoe Lake.

At the four-mile point, the road completes its climb over the Virginia range. Here, you can look both west to Washoe Valley or east to the Dayton Valley. To the north is a smaller valley tucked into the mountain range.

The road winds around the summit and, about a half-mile ahead, you can see the ruins of the mining camp of American Flat, just below. All of the views are beautiful and make the somewhat difficult journey worthwhile.

At the six and a half-mile point, you can see the community of Gold Hill below, with the taller buildings of Virginia City peeking over the mountains to the north.
From there, the road skirts a large open pit mine that has long been abandoned before gradually descending to meet Nevada Route 341 at the Virginia City-Gold Hill boundary.

While the total mileage has been only eight miles, it seems a world away.
at April 23, 2007
Email ThisBlogThis!Share to TwitterShare to FacebookShare to Pinterest