This Berlin is No Berlin 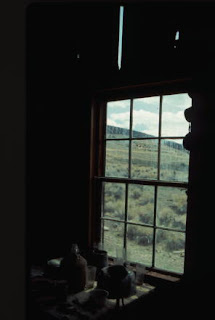 A few years ago, I took a German travel writer to Berlin, Nevada. He wanted to see how the early 20th century mining town compared to his famous metropolis.

He was amused by Nevada's version.

The truth is that Nevada’s Berlin is at best a footnote in the state’s rich and colorful mining history. At its peak, it could claim about 300 residents and produced only a trickle of silver.

Berlin’s most significant contribution might be that it has survived nearly intact. This distinction has allowed it to become the only ghost town in Nevada that is a state park.

Berlin was one of the many camps that cropped up around the time of Nevada’s second mining boom, which was spurred by the discovery of silver in Tonopah in 1900.

In Berlin’s case, silver was discovered in 1895. About two years later, a town was founded on a steep shelf in the Shoshone Mountains, overlooking the remote Ione Valley.

The post office opened in July 1900 and by 1905, the town had a 30-stamp mill, large company store, an auto repair business, assay office, saloons, school and a boardinghouse.

Two years later, the mill and mine closed and Berlin entered its first depression. The town briefly revived in 1909 when the mine reopened and a cyanide plant to process ore was constructed below the town.

By 1918, however, the post office closed and the town had begun its final slide. For the next decade, the tailings were reworked and a mining company maintained a presence in the former camp—which is why it was saved the fate of most ghost towns.

While the large, wooden mill was stripped of its metal stamps and other equipment during World War II, it has survived the years of neglect and is probably the most impressive structure in the town.

In the 1970s, Berlin was acquired by the Nevada Division of State Parks. The park service stabilized the worn, wooden buildings and erected interpretive signs.

During the summer months, guided tours of the town site are offered. The tour is worthwhile because the park rangers do an excellent job of recreating the mood of what life was like in this remote mining camp.

For instance, when you enter one of the drafty, simple, miner’s shacks you can’t help admiring their toughness and spirit. An uncomfortable-looking cot, cast iron stove, tiny metal tub, table and chair were the main furnishings.

One of the cabins that is in particularly good condition was used by the mining company’s caretaker until the 1970s. It’s a remarkable little cottage that well illustrates how just about anything was utilized in the construction of these places. For example, cardboard boxes have been nailed to the inner walls to serve as insulation.

Other structures in the park (about a dozen remain standing) include the assay office and a machine shop. Behind the mill, you can also find an ore cart trestle and track system leading to several shafts dug into the hills above the town.

Near the mines, there are ruins of an equipment building, ore bins and chutes, cables and other mining paraphernalia. You can also find the remains of an unusual multi-hole outhouse.

If you search the sagebrush around the buildings, you can stumble onto other remnants of the town. For instance, in one place about a half mile south of town you can spot the former site of one of the saloons by all the broken glass on the ground.

A small cemetery southeast of the town has a few graves—most of the dead were moved to other towns when the residents relocated after Berlin’s decline.

By the way, Berlin was named by German prospectors after the Old World Berlin.

The German journalist thought that was pretty funny, too.

Berlin-Ichthyosaur State Park is located about 300 miles north of Las Vegas via U.S. Highway 95, State Route 361 (to Gabbs) and State Route 844. For more information contact the Nevada Division of State Parks, 775-687-4370.
at March 08, 2007
Email ThisBlogThis!Share to TwitterShare to FacebookShare to Pinterest