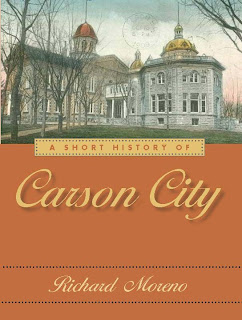 While hundreds of books about Nevada history have been published over the years, only a few have focused on Carson City. Recently, I completed “A Short History of Carson City,” which was my attempt to add something new to the capital city’s story.

Published by the University of Nevada Press, the book traces the history of Carson City from its beginning as a trading post in the Eagle Valley in 1851 to the present. Along the way, readers learn about some of the larger-than-life characters associated with the community, such as Abraham Curry, the man generally credited with founding Carson City, and writer Mark Twain, who spent a few years in the capital.

The book outlines the development of the community as it evolved from a dusty outpost on the edge of the Eastern Sierra range into one of the state’s most important cities and host of the state capital.

While the Washoe people had long lived in the region, the first white settlers arrived in about 1851. A group set up a trading post in the area north of Carson Valley, which they named Eagle Valley, and began catering to travelers heading to California. Within a short time, others settled in the valley, including Dr. Benjamin L. King and Jacob Rose.

But Carson City didn’t really become Carson City until the spring of 1858 when Abraham Curry, John J. Musser, Francis M. Proctor and, a little later, Benjamin F. Green, decided to purchase approximately 865 acres in the valley, which they planned to develop into a community.

Years later, Proctor acknowledged that he had come up with the name, Carson City. He said it was named after the Carson River, which flows through the south end of the valley. The river, in turn, had been named in honor of the famed scout Christopher “Kit” Carson, who led some of the earliest expeditions into the land that would become Nevada.

The group hired a surveyor to layout lots and streets, and once they had their blueprint for a town, began selling lots. Curry set aside a four-acre chunk of land in the center of the planned community for a public square or, he hoped, as the site for territorial government buildings. It would turn out to be a prescient decision.

Within a short time, a business district began to form in the center of the settlement around Curry’s public square. To the east of the budding community were sandstone deposits, which provided building material for many of the community’s buildings.
In 1861, Curry, who became the most prominent of Carson City’s founders, built a two-story stone hotel near the quarry, which he named the Warm Spring Hotel because of the presence of natural hot springs in the area.

An energetic promoter, Curry also lobbied hard for Carson City to become the capital of the newly organized Nevada Territory. To sweeten the pot, he allowed his hotel to host meetings of the territorial legislature at no cost. In response, one of the first acts of the legislators was to designate Carson City as the territorial capital.

Later, when Nevada statehood was granted in 1864, it was only natural and logical that the state capital also be located in Carson City. Curry donated the four-acre plot of land in the center of the community to the new state for a future capital building.

The middle chapters describe the region’s ups and downs in the late 19th and early 20th centuries, when the state’s mining industry slumped, as well as the community’s slow but steady march from a sleepy hamlet that prided itself on being America’s smallest capital city (in the 1920s and 30s) to modern, medium-sized American city.

Later chapters cover more recent developments such as the growth of new commercial enterprises on the city’s south end, the rebirth of the V & T Railroad and the development of the Carson City Bypass.

“A Short History of Carson City,” retails for $21.95 and is published by the University of Nevada Press. It is available from local bookstores as well as from the UN Press at www.unpress.nevada.edu.
Posted by The Backyard Traveler at 4:09 PM