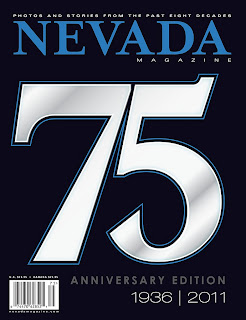 It probably never struck the folks who started Nevada Magazine back in 1936 that they might be creating a publication that would be around three-quarters of a century later.

The magazine, originally called Nevada Highways and Parks, was the brainchild of Fred Greulich, the publicity director for the Nevada Department of Highways, and his boss, Robert A. Allen, the Nevada State Highway Engineer. In the first issue, Greulich wrote that the purpose of the publication was to promote Nevada’s then-spanking new paved highways and its state parks.

For its first decade or so, Nevada Highways and Parks was a 20-page, black-and-white publication that contained no advertising and was distributed free to anyone interested in visiting the state. During most of those years, Greulich wrote the entire issue, which would often focus on a single topic, such as Virginia City or ranching in Nevada.

Over the years, however, the publication evolved. Starting in the late 1940s, the issues began featuring color photographs and, starting in the 1950s, a broader mixture of story topics.

In 1955, Greulich was replaced by Don Bowers, who gradually transformed the publication into more of a consumer magazine with subscriptions, newsstand sales and advertising. In the 1980s, C.J. Hadley became editor and gave the magazine a distinctive voice and personality.

Since then, the magazine has grown and changed with the times, becoming a slick, award-winning publication that does an exemplary job of spotlighting the people, places, events and history of the Silver State.

On the occasion of the magazine’s 75th birthday, the current magazine staff, which includes its publisher, Janet Geary, as well as Editor Matt Brown and Associate Editor Charlie Johnston, has lovingly produced a high-quality, 192-page collection of two dozen of some of the best stories that have appeared in Nevada Magazine over the past eight decades.

A particularly fun aspect of the issue is that it also includes images of the covers of every issue of Nevada Magazine since 1936—and there have been some classic ones over the years (check out the ‘bucking bronc’ cover from May 1937 and the atomic bomb/mushroom cloud cover of June-December 1953).

The issue is divided by decades. For example, the first reprinted story from May 1936 is an un-credited but Greulich-penned piece about the then-new Boulder Dam (the name wasn’t changed to Hoover Dam until 1947).

Other noteworthy articles included in the special edition include Lillian N. Ninnis’ “They Stayed Chinese,” a Winter 1967 story about how the Chinese came to Nevada and the West in the 1860s and their lasting impact on the region, and the late Guy Shipler’s story, “The Man Who Bought Nevada: The Shadow Emperor,” a story about eccentric billionaire Howard Hughes’ involvement in Southern Nevada’s development.

Fun stories from the 1980s and 1990s include longtime Nevada Magazine contributor David W. Toll’s “The Last Stagecoach Robbery,” about a famous crime that occurred in the remote Northern Nevada outpost of Jarbidge, and Martin Griffith’s piece, “What’s Nevada’s Oldest Town,” which recounts the controversy among some historians about whether Genoa or Dayton should be considered the state’s oldest settlement (you read it and decide for yourself!).

In the interest of full disclosure, the issue includes two stories that I wrote during the time I worked as the publisher of Nevada Magazine from 1992-2006.

Nicely accenting the reprinted articles are historic photos, which are often juxtaposed with contemporary shots of the same subjects. This special edition is a ‘must-have’ for anyone interested in Nevada’s history or in the longest-running magazine devoted to profiling the state.

The 75th Anniversary Edition of Nevada Magazine costs $19.95 and is available for order via the Nevada Magazine web site (www.nevadamagazine.com).
Posted by The Backyard Traveler at 12:41 PM