Dayton's Buildings Say Much About the Community 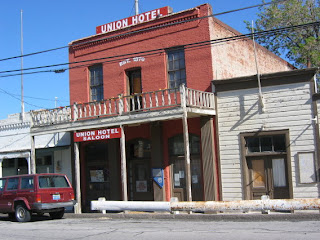 It’s been said that the old mining town of Dayton was the site of many Nevada firsts. It was reportedly the site of the state’s first marriage as well as its first recorded dance, which was apparently attended by nine girls or women—and 150 men.

The community traces its roots to the late 1840s, when gold was discovered in nearby Gold Canyon. A small group of miners began working the canyon, including James “Old Virginny” Finney, namesake for Virginia City, who is buried in the Dayton cemetery.

In addition to the prospectors, Dayton was a stop on the Emigrant Trail for travelers heading to California. An early trading post, known as Hall’s Station, after owner Spafford Hall, was one of the first businesses established in the area.

In 1861, the settlement officially became known as Dayton, after surveyor John Day, who plated the community.
Among its residents in those days was a fairly large population of Chinese, who were brought to the region to build a two-mile water ditch from the mouth of the Carson River Canyon to Gold Canyon. The Chinese also reworked placer gold tailings left behind by other miners.

Several mills were eventually built near Dayton, which became a thriving ore-processing region for Comstock mines. Ruins of one of them, the Rock Point Mill, can be found near the entrance to the Dayton State Park, east of town.

In 1866 and 1870, fire destroyed many of Dayton’s original buildings. Yet despite disasters, calamities, neglect, and the effects of time, you can still wander the narrow streets of Dayton and find a number of historically important buildings that help tell the town’s story.

Begin your tour on Main Street in Dayton’s historic downtown. One of the first buildings you see is the Union Market. Built in the 1860s, this one-story stone structure was a butcher shop until the 1940s.

Adjacent is Daniels Millinery, originally a brewery built in the 1870s. Later used as a general store, this building, which has a wooden overhang, was also used until the 1940s.

Probably the most prominent building on the block is the Union Hotel. This two-story brick structure near the intersection of Main and Pike streets was built in 1870 on the site of an earlier hotel of the same name.

Next to the Union Hotel is a building known as “Dutch's Antiques.” This tiny one-story wooden storefront was built in the late 1870s or early 1880s, and has housed a number of businesses over the years, including a post office and a restaurant.

Adjacent, is the distinctive two-story wood frame Fox Hotel building. Built in 1889, this business operated until 1907.

One of the most impressive historic buildings in Dayton, located on Pike Street (a half-block from the intersection of Pike and Main) is the Odeon Hall. Built in 1870 on the site of two earlier halls, this two-story red brick landmark has appeared in several movies and is now a restaurant and saloon.

A half block east of Odeon Hall, is the former jail and firehouse, a brick structure built in 1870 to house a new fire engine purchased after the 1870 fire.

Nearby is the tiny St. Anne's Catholic Church, built in the late 19th century. Originally located in Yerington, this petite church was moved to Dayton in 1937.

Adjacent to the church is the former Dayton High School, now a community center. Built in 1918 on the site of the former county courthouse, which burned in 1909, the school's designers incorporated the courthouse’s foundations.

The former Dayton Public School, built in 1865, is one of the oldest public school buildings still standing in the state. This solid stone building, which still looks like an old school house, was used as a school until 1959 and is now home of the Dayton Historic Society Museum.

Directly south on Shady Lane is the Bluestone Building (it has the distinctive "Tahoe Beer" sign painted on the side). Built in the 1870s, this stone structure was originally constructed by a mining company that produced copper sulfide or "bluestone," which was used in processing gold and silver ore. Today, it has been restored into county offices.

If you continue driving a half-mile west on Cemetery Road (the Bluestone Building is on the corner of Cemetery and Shady), you reach the Dayton Cemetery. In addition to offering a beautiful view of the surrounding valley, the cemetery features historic porcelain markers on some of the graves of early Italian settlers.

For more information, contact the Dayton Area Chamber of Commerce, 775-246-7909, www.daytonnvchamber.org.
Posted by The Backyard Traveler at 6:12 PM