The Tragic Path of the Pyramid Lake Indian War 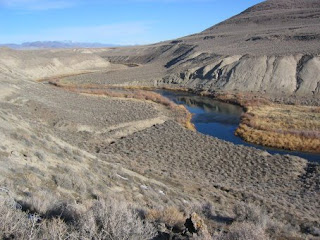 One of the seminal events in the shaping of pioneer Nevada was the Pyramid Lake Indian War of 1860. The conflict was the result of a volatile cocktail of ignorance, misunderstanding, anti-Indian sentiment, and miscalculation.

The roots of the war can be traced to the massive influx of white settlers through the region that would become Nevada after gold was discovered in California in 1849. The situation was exacerbated when large numbers of whites settled in the state following the discovery of silver in the Comstock area in 1859.

The new residents immediately began to take advantage of the area’s resources—digging holes to find the valuable ore, cutting down trees for fuel, damming streams, hunting available game and cultivating the land.

The problem, of course, was that these actions severely affected the quality of life for the region’s earlier inhabitants, the Washoe and Paiute tribes. For instance, the trees provided nuts that were an important food source.

The fact that natural resources are so limited in the harsh Great Basin region only served to heighten tensions between the settlers and the local peoples.

The actual battle was finally triggered in May 1860 after two Paiute women, who had gone hunting for pinenuts, were kidnapped and held at a place called Williams Station, located on the Carson River, near the present day Lahontan Reservoir.

The crime was discovered by local tribal members, who rode to the station to free the women. A skirmish ensued, during which four white traders were killed and the station was burned.

Despite the circumstances, word spread quickly that the Paiutes were on a rampage. Within days, the story had been so exaggerated and distorted that many Virginia City and Carson City residents believed that an army of Paiute warriors was heading their way to massacre them.

Three days after the Williams Station tragedy, a 105-member volunteer citizen militia had formed—led by Major William Ormsby of Carson City—and set out to seek revenge against the Paiutes.

The army was untrained, undisciplined and ill-equipped—but arrogantly confident they could easily defeat the Indians.

The motley group first headed east to Buckland’s Station (near present day Fort Churchill State Park), then seven miles to the site of Williams Station. After burying the dead, the group continued north to the present day site of Wadsworth.

On Saturday, May 12, the militia members awoke to find the ground covered with several inches of snow. Despite the weather, the group packed up and moved north along the Truckee River toward Pyramid Lake.

At a point about a half-mile north of present-day Nixon, the army spotted a cluster of Indians on a bluff above the river. The militia split into two groups, with about 30 men giving chase to the Indians.

Once atop the bluff, however, the smaller group found itself surrounded by warriors. After trading bullets, the militia members were driven back to the meadows below.
Meanwhile, another group of Paiute warriors circled to the south of the militia, effectively cutting off any possibility of retreat.

At this point, the trap—devised by the Paiute’s war chief, Numaga—was set. Militia members found themselves surrounded by warriors, mired in the muddy gulch. Despite repeated efforts to charge out of the gully, the volunteers were pinned down.

Two hours after the battle began, it was effectively over. Historical records indicate that about 75 of the 105 militia members, including Ormsby, were killed.

Following the disastrous May 12 encounter, a more formidable army of 800 white combatants gathered, which included trained soldiers. On June 2, 1860, this force engaged the Paiutes south of Nixon. This time, the army broke the Indian forces. The Paiutes suffered many casualties and scattered after the skirmish.

Within months a treaty was negotiated and the Pyramid Lake Indian War was over. The federal government responded to concerns about any future conflict by erecting a series of forts in Nevada, including Fort Churchill near Silver Springs (now a state park).

It's still possible to find the location of Nevada’s most famous war. The terrain, in fact, is the largely the same as described in historical records. The Truckee River winds through narrow, flat river bottomland—now largely used for ranching and recreation. Steep, eroded cliffs and hills rise above the river on both sides.

Standing on one of those hills, adjacent to State Route 446, it's easy to look down on the site and imagine how it unfolded. One can imagine the fear and anticipation felt by members of the volunteer army as they marched down the center of this gulch, searching for any movement in the deep shadows of the uneven cliffs and hills.

In other words, an ideal place for an ambush.

Additionally, “Sand in a Whirlwind” by Ferol Egan (University of Nevada Press) is an accurate historical retelling of the circumstances that led to the war.
Posted by The Backyard Traveler at 6:51 PM